So while I was safe and sound here in Ottawa yesterday my home (a.k.a Newfoundland) was hit by one massive storm-Hurricane Igor. The first hurricane to hit Newfoundland in a long time did severe damage to much of the province resulting in a state of emergency in a number of towns and downed trees and snapped power lines. As of this morning 30 000 residents were still without power. Rain fell at an alarming rate and by the time it stopped there had been 200mm in a number of areas. Roads were washed out and some towns were left stranded with no link to the world beyond their community. My house is fine-our little trees are literally lying on the lawn outside the house but they didn't snap off even though many trees in St. John's did. The worst is my parents have to get it all cleaned up by tomorrow morning because they are heading to Florida to take a cruise for their 30th wedding anniversary.
In other news, I made a layout on Monday night. Another sit-here-and-scrap-for-an-hour. This one is not quite done-no journaling on that manilla tag just yet. The story is pretty funny though. So we went jet skiing in Bermuda with a group of people. You have to take a tour in order to do the jet skis because some of the reefs are near the surface and they don't want you to damage any of them with the jet ski. So we get out there on the water, waiting to leave and this family shows up. Their late. It's a man and a woman and a son. They were under the impression the three of them could go on one ski together. Not so much. So the mom ended up going by herself. She was terrified. But the funniest was when we were idling just waiting to leave the dock area and I said to Matthew- "Wow! That guys look just like Everybody Loves Raymond". And he really did! It was hysterical. With his shades on he could have been Ray Ramano. We dubbed him 'everybody loves raymond' and his wife 'ma' for the one hour ride around the bay. We had quite a few giggles over it. Here's the layout. 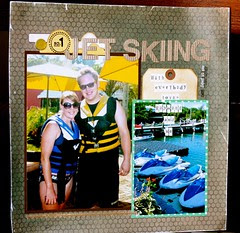 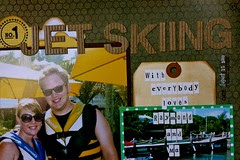 It's a combination of a number of different kits and bits and pieces from the Documentary line of Studio Calico-shocker I know!
xoxo
K
Posted by Krista Wells at 7:30 PM