The weather here has been ridiculous. Just a few weeks ago we had three snow storms in one week. This past weekend we had more rain than I've seen in a long time cutting the snow in half. It's been windy and rainy and just overall miserable lately.

So right now I wish that I were in a warmer, dryer climate-like maybe Florida.

In the Fall we managed to squeeze a few days in Florida into our travel schedule. We had a blast and went to two different waterparks in the four short days we were there. 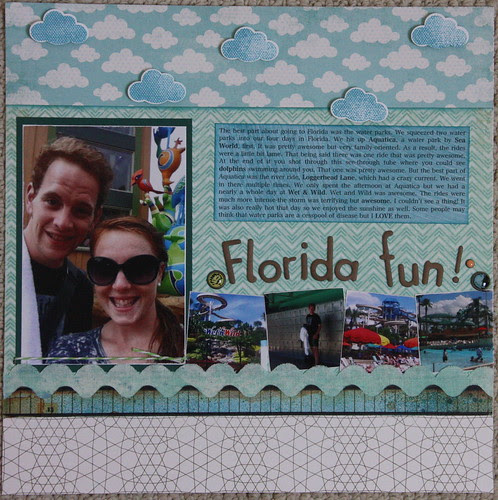 In this layout I tried to mimic the blue skies and clouds that punctuated our days in the parks with the punched clouds and the pattern paper. I also used the Prima mistables canvas ribbon and the sassafras pattern paper strip to create 'waves' below my photos like the water at the park.

Florida was awesome. I wish I was on vacation right now in Florida and enjoying a little water park action.

What's the weather like where you are? Are you buried in snow or enjoying wearing your flats in the sunshine?!