Week In The Life: The Album

The Paperie took part in Ali Edwards' Week in The Life as a community this year and if you were involved you may have joined us on September 28th for a day-long crop to complete your album. I hope that the week-long workshop was a good one and that you've been able to complete your album. If not, there's always time at the upcoming Fall retreat next month.

Mine is finished and I thought I would share it today.

I kept it simple. I stuck with a formula which made it easy for me to complete it all in a timely manner.

So here's how it shaped up- 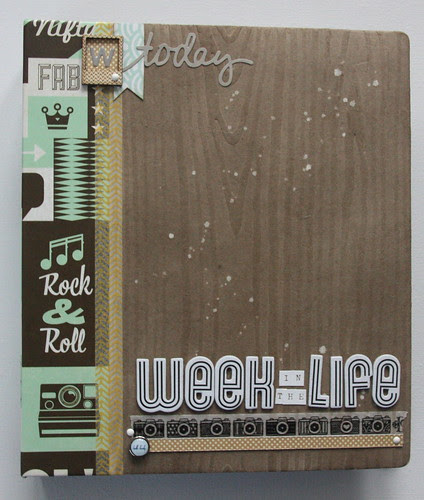 I used a Basic Grey album for this project. Specifically the Hipster line. I liked the wood grain chipboard album that it came in but jazzed it up with some ink and a few Mr. Huey white tap-tap-taps of speckled mister. 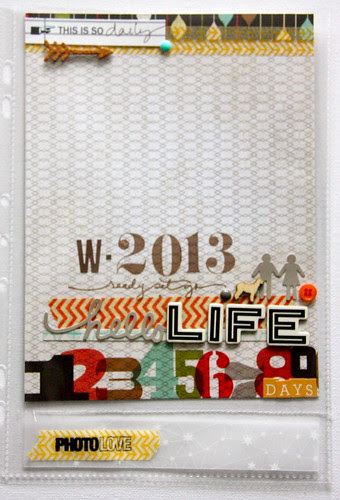 My opening page is a trimmed page that came with the album. I liked the numbers at the bottom and used the '7' to identify my days. I also love and adore those Avery Elle number stamps that I used for the '2013'. They are available at The Paperie if you'd like to pick up a set. They are the bomb. 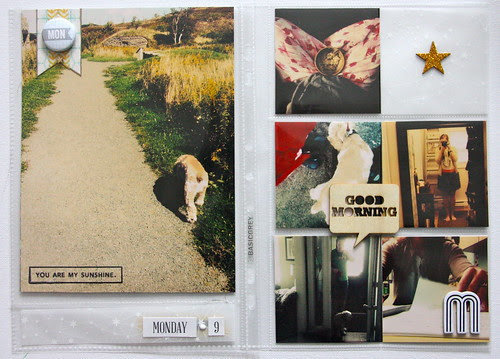 My formula included a large 6 by 8 photo but I had a dilemma- the page protectors for said photo are obviously much larger. Yes, those photos are 6 by 8. So I added a 1" piece of vellum at the bottom of each of the full page protectors and sewed it into the page protector with white twine. I added the day and date as well to each vellum piece, sticking it on the outside of the page protector. I also added a flag and a badge to each main photo. 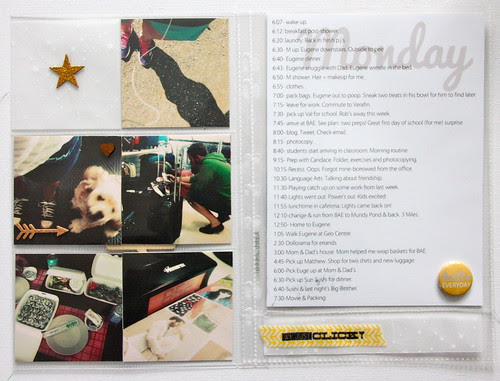 The next page was a combination of instagram photos. and one pocket included more of that SC vellum that I love dearly, topped with a little embellishment. For my notes page I took the info that I typed up on my phone each day using the Evernote app and put them in a 6 by 8 document in photoshop and just added a brush, minimizing the opacity. I added a badge to that too and of course the vellum is at the bottom of that page as well. 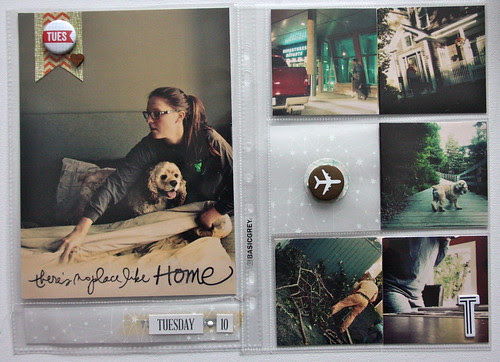 Each day I tried to take some selfie shots with both my DSLR & the timercam app on my phone. They were life saving since M was out of town from Tuesday onwards throughout the week. 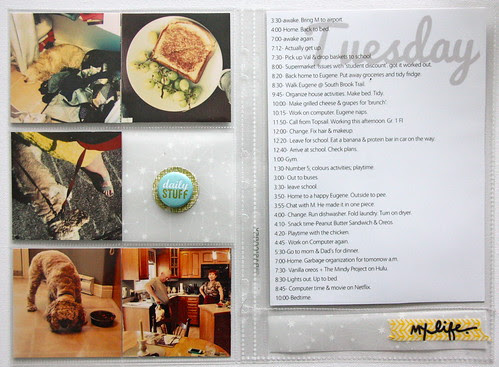 I love that I got some shots of my parents in this week's project. I spent a lot of time there while M was away. 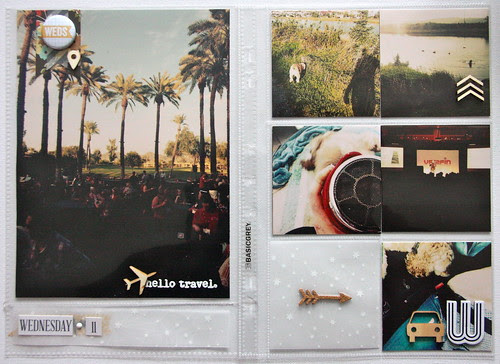 I also have the greatest husband ever because he sent me shots of his work trip to include in my project. He's pretty much the best. 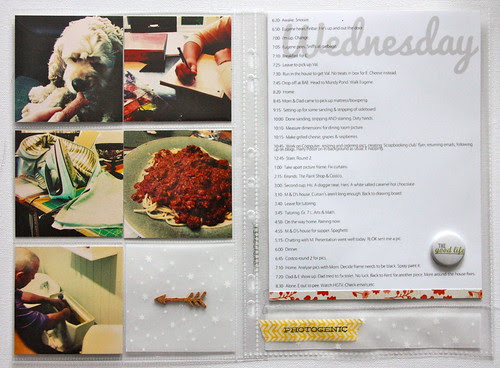 Because I had some white space at the bottom of each of my weekdays-due to not taking notes as diligently as the week went on-I added some pattern paper from the pp that came with the binder album. This way it all coordinates with the look I was aiming for. 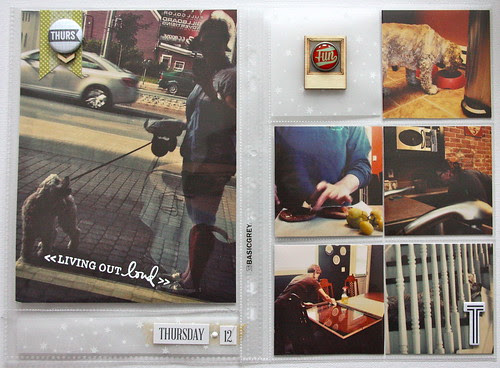 Another repeated element that I discovered I loved was stamping a sentiment- and sometimes embossing- on the large photo. This is one of my favs for the week-I love a good reflection photo. 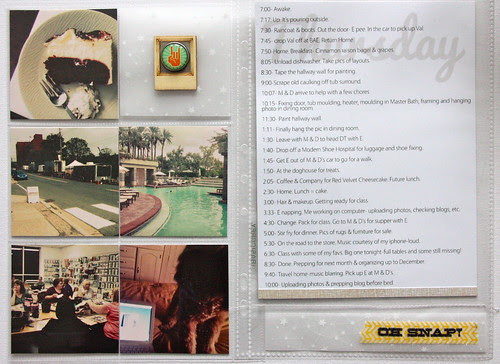 It was also fun finding little embellishments to go on each vellum piece. It was like a little treasure hunt through some of my fav things for each page. 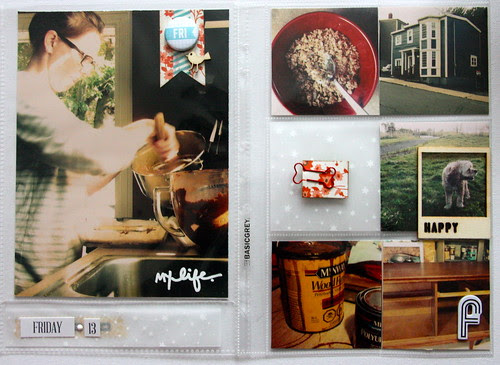 Yes. That is me with my tongue stuck out-like a 3 year old- concentrating on keeping the caramel in the dish for Taffety cookies I made that morning. 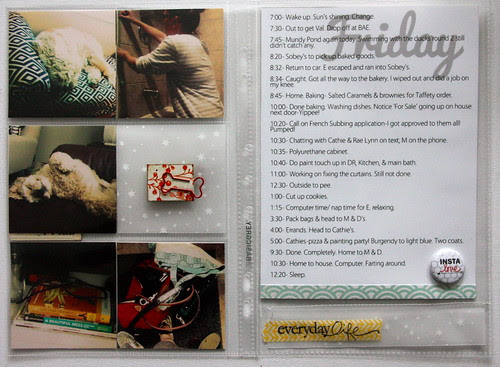 My dog likes to sleep. Have you noticed? 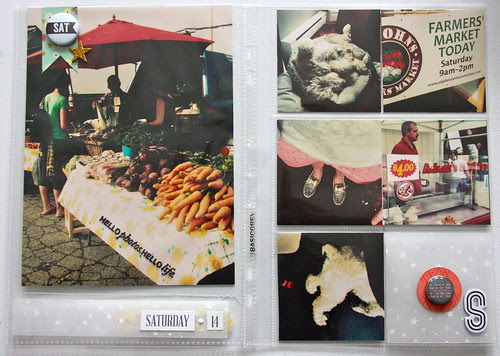 Something else that I did to create a sense of cohesiveness in this album was use the same tones in my photos. I used some retouching edits by Pioneer Woman for them and love how they turned out. 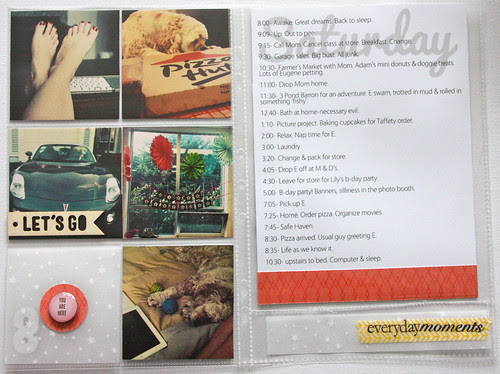 Here and there I also added a few embellishments to the little instagram pics as well like the 'Let's Go' wood veneer. 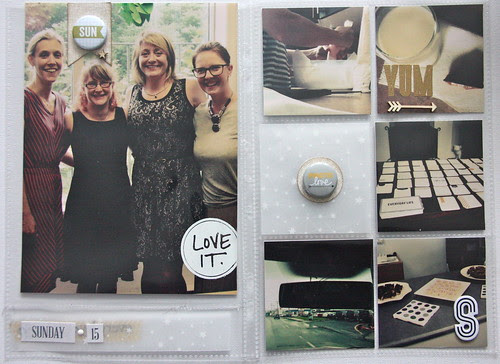 I also added the initial for each day of the bottom right hand corner instagram photo on each page as well. Those letters are so cool. 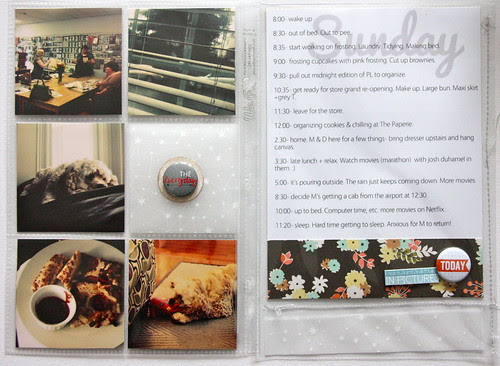 Can you tell that as the week went on my journaling became a little lax? Lol. 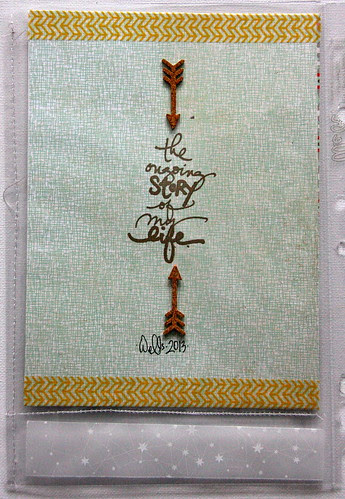 And that's where it ended-on a little quote by Ali Edwards using some Technique Tuesday stamps & a few cork arrows from SC.

I loved this project. I will def do it again. I'm not sure I'd use another BG album though. I was disappointed with the page protectors. The ones that came with the album were cheap and flimsy. However, the ones I bought in a separate package were of much thicker, better quality. Strange. The other thing that bothered me was that the large page protector were huge-not even remotely close to 6 by 8 and it can be difficult to find a printer that prints much bigger than that without a lot of tinkering and fooling around.

So there you have it. Week in the Life for Fall 2013. Did you do a WITL album this year? I'd love to see it-leave me a link in the comments if it's online!